There are two companies and their product lines we have written about frequently in the past, each in articles devoted to just one at a time.  Today, we get to write about both of them in the same piece.

From how the Festool Domino works, to Festool Granat and Rubin abrasion pads, to which blades to use with a Festool plunge saw, and many other Festool-related products and subjects, we’ve presented much information about the company and its line of power tools and accessories.

We like the Festool line, even if it is a bit pricey.  We even wrote about whether Festool tools were worth the extra money.

With regard to SawStop, our past pieces have included discussion about:

We’ll discuss that safety feature in a few moments.

Festool manufactures high-end power tools that are well-known in the woodworking industry.  Operations began in 1925 by founders Gottlieb Stoll and Albert Fezer under the company name Fezer and Stoll.  Their initial product offering was the first portable chain saw, introduced in 1927.

Six years later, in 1933, the name of the company was changed to Festo, which in turn founded Festo Tooltechnic in 1992.  The power tool division of the company was separated into what we now know today as Festool eight years later.  The formal name of the corporation today is TTS ToolTechnic Systems AG & Co. KG.  Festool is a subsidiary of its parent company,  TTS Tooltechnic.

The first production line in the US was established in Lebanon, Indiana, in 2017.  Guide rails for the Festool track saw, as well as accessories for other of its power tool line, are manufactured there.

The company’s product line is based upon a system that relies on a modular plastic container system that is produced by one of its related companies.  That system, called “systainers,” provides organizational and storage convenience that is favored by many in the woodworking industry.

In one of our earlier pieces, we answered the question if Festool power tools are worth the premium price you pay for them.  We identified a value system to help determine the answer – consistent excellence in performance over a long period of time; a tool that does something no other tool does and does it extremely well.

We made the argument that, in some instances, Festool power tools met or exceeded those value considerations and made them worth the higher price you would pay for them.  We included the Festool Domino, the Festool Kapex Miter Saw, its dust collection system and accessories, and even mentioned its Granat and Rubin abrasion pads.

To have one power tool product so highly rated is quite an accomplishment, but to have at least three, if not four, including the abrasion pads, is quite remarkable.  Festool stands as a premium manufacturer, and its reputation is well-earned. 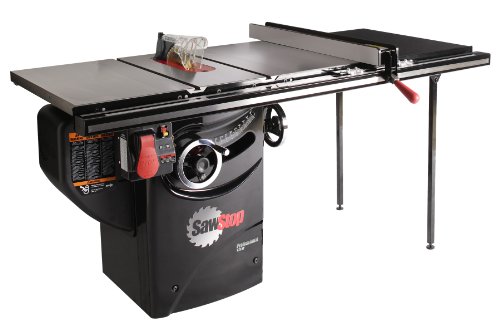 While the name Steve Gass may not be very well known generally, in the woodworking industry, and especially in the manufacture of table and cabinet saws, he is known as the patent attorney/amateur woodworker/Ph.D. in physics inventor who came up with the idea of a safety system for table saws.

The story is quite amazing, actually.  Within 2 weeks, Gass came up with the original design, and in the third week, he built a prototype using a $200 second-hand table saw.

He used a hot dog in the initial testing of the 5-millisecond braking system, and then he decided to test it on himself.  He gave himself a shot of novocaine in the left ring finger and then placed the finger into the teeth of the spinning saw blade.

The saw blade stopped as he had planned, although he did say it “hurt like the dickens” at the time.  The finger remained on his hand, though, and that was the point of the exercise.  This all happened in 1999.

The prototype was demonstrated in 2000 at a trade show by the “three guys out of a barn” who formed SawStop.  Meetings, further demonstrations, negotiations, and more all followed, all unsuccessful to find an established company and manufacturer to pick up the SawStop system, and in frustration, Gass and his principals decided to become a manufacturing company on their own.

The first saw was produced in Taiwan in 2004.  A year later, SawStop had grown to 8 people in a barn Gass had built for the purpose.  In 2014, SawStop reported it had shipped its 50,000th table saw.

Gass’s background as a patent attorney positioned him perfectly to take care of protecting his intellectual property in the design and development of the SawStop safety feature.  As we wrote in our piece on the SawStop patents, he followed all of the patent law features to protect the company well beyond the usual 20 years.  He did so by using patent tactics that included:

It helped the company quite a bit that Gass was a patent attorney, and now there are a number of patents that will run until at least 2026 unless there are further continuation or divisional patent claims made in the meantime.

The line of SawStop table and cabinet saws has expanded beyond that initial design and prototype, of course.  Today those products include:

We asked in a previous article what your finger is worth, and it was a serious question.  Yes, the SawStop table and cabinet saws are expensive, but the safety system that brakes the blade in 5-milliseconds can save your finger in an accident.

The Festool – SawStop Purchase And Sale

It’s no wonder, in light of the SawStop assets and its line of table and cabinet saws with a safety feature that prevents loss of fingers, hands, and arms, that someone might be interested in its acquisition.  Along came TTS ToolTechnic.

In a press release dated June 26, 2017, SawStop announced that it had been acquired by TTS Tooltechnic Systems, the parent company that owns Festool.  It also owns Tanos, the company that manufactures the “Systainer” system that is a part of the Festool appeal to woodworkers.

Each company is privately owned, and shares are not traded publicly.

Earlier in 2022, SawStop announced that its prices for all table and cabinet saw models would be going up.

Festool, considered the owner of SawStop generally among woodworkers now, is offering its own table saw, the TKS 80 EBS 2200W.  It includes a responsive sensor, integrated SawStop technology, and an extensible work surface, all designed for greater safety in the woodworking shop.  Its starting price is close to $1900, which puts it in between the lower and upper price ranges of SawStop models.

With SawStop technology appearing in Festool-branded table saws, we assume that SawStop’s patents were also a part of the transaction.  It would have been foolish otherwise for Festool’s parent company to buy it.

In an earlier article, we included a very short video that demonstrated the SawStop safety system in action.  It was so cool, using a hot dog in the demo, just like Steve Gass did originally back in 1999, that we want to show you again.

It’s only 21 seconds long, but you should watch it.

Backstories about inventions and companies that form from them are always interesting.  Steve Gass put his finger where his money and mouth were to demonstrate the performance of his saw blade braking system, and the rest of the story played out well for everyone involved.  Would you have been so brave?

SawStop sold to Festool’s parent company for a lot of money (we were unable to find out exactly how much for this article).  From nothing but an idea in 1999 to $40M USD in 2017 sales, and then a buyout by Festool et als, is an interesting and amazing story.