While “You get what you pay for” is so often proven true, the question as it pertains to woodworking shop power tools requires something more than an axiom.

I have a winter coat purchased from LL Bean 30 years ago that still keeps me warm.  It washes well, wears well, and can still stand up to mountain winters. I don’t recall what I paid for it, but whatever it was, the purchase was a smart one.  Quality products matter.

The same can be said about quality tools for the shop.  Even the cheapest circular saw will cut wood.  For a time, at least.  But how much use will you get out of it over what period of time, and how good will that use be?

This is the value question, of course.  It’s not just the life of the power tool – it’s the good life of the power tool and everything that “good” means.  Unless we make a living from our woodworking (furniture maker, cabinet maker, for instance) and are merely weekenders from time to time in the shop, our budgets are probably tight.

Spending money becomes painful, and we must be convinced of good value to justify it.  We’ll see what we can do to help with this question about Festool.

What Adds Value to Power Tools For the Woodworking Shop?

These add value to power tools:  accurate and consistent performance over time.  These require high-quality manufacturing.  A little innovation helps a lot, too, a power tool that does something that other power tools don’t.  This is a premium value add-on, actually.

We are on our way to answering the primary question of value.

The Festool brand manufactures high-end power tools and began operations in Germany in 1925.  Its founders, Gottlieb Stoll and Albert Fezer started under the name Fezer and Stoll and manufactured the first portable chain saw in 1927.

In 1933, they changed the name of the company to Festo (Fezer and Stoll), and later, Festo founded Festo Tooltechnic in 1992.

The power tool division was further spun off 8 years later when Festool was established.  The company remains under private ownership by Gottlieb Stoll’s family today.

It operates subsidiaries in more than 2 dozen countries, including the US.  The first production line in the US was established in 2017 with a facility in Lebanon, Indiana.  Its guide rails for the Festool track saw are manufactured there, as well as multi-function accessories for other power tools cordless and corded.

Festool’s product line is system-based and relies upon a modular plastic container system produced by one of its related companies, TANOS, and called “systainers” (system containers) for organizational and storage convenience.  Festool’s systainers are favored by many woodworkers for that reason.

We’ve written in past articles about Festool power tools, including the Festool Track Saw, the Festool dust extractor, Festool Granat and Rubin abrasion pads, and the Festool Domino.  You might be able to tell we think highly of some Festool products.  Yes, they are expensive, and you will pay a premium price for them.  But we’ve already suggested they carry value.

Professional woodworkers consider Festool’s line of power tools to be at the highest level of craftsmanship, such that some power tools can not be improved upon.  Their standard of manufacturing is virtually unmatched in the industry, and that demands a premium price.

Festool’s line of power tools is designed and manufactured to provide the user with efficient, accurate, and consistent results, and this will save you money on each of your projects in time and cost of materials.  Again, an added value. 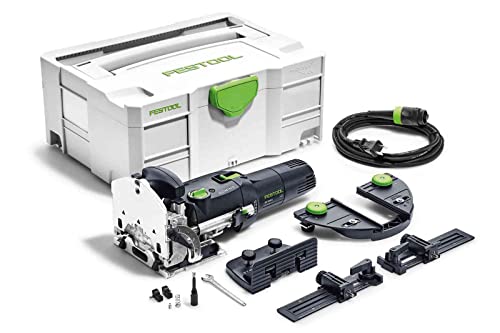 Perhaps the Festool power tool and accessories that stand out the most for value, as we have defined it earlier, is the Festool Domino.  For power joinery tools it is, in our opinion, unmatched in the industry.

Mortise and tenon joints are very strong and very popular among furniture makers.  These joints are common when 2 pieces of wood are to be joined at a right angle and have been used for millennia for their strength and endurance.

Those centuries ago, a chisel and hammer were used to carve out the mortise, that slot cut out in one of the pieces of wood, and a saw would be used to cut the tenon that would fit into that mortise.  Glue and some clamping then completed the joint.

The Festool Domino came to market in 2007, and woodworkers knew they were looking at something very different for their mortise and tenon work. The single function of this power tool was to cut a mortise in a single plunge – into both pieces of wood.

Festool then offered pre-cut grooved tenons that would fit into each mortise; a little glue and some clamping, and the joint was created.  The grooves on the pre-cut tenons gave more gluing surface, and the job got done quickly and easily with great strength.

While a biscuit joiner is also a single-plunge tool, the Domino has a drill-like cutter with a spinning bit that does all the work.  It moves sideways once plunged and creates a full-rounded mortise.

With mortises cut into each piece of wood being joined, and Dominoes made to the specific size of the mortise (a variety of sizes are offered, and the tool is adjustable to accommodate them in the cutting of the mortise) fit with their glue into the mortises to build the joint.  It’s a simple concept, quick in its execution, and easy to finish.

It changed the way mortise and tenon joints are created, and the Festool Domino is the perfect tool for the task.  No other power tool can perform this task.  That seems to satisfy the criteria for added value as we defined it earlier and would tend to suggest a premium price is warranted:

The Festool DF 500 will run you around $1000; a bag of assorted domino sizes is around $30; and an assorted size pack with cutter and T-Loc systainer will be around $350.

The Festool DF 700, larger and heavier and able to cut larger mortises, will run you $1500, with the same accessories at about the same price.

These are 2022 prices, too.  Yes, expensive, but the value is there for this unique power tool.  For the professional woodworker engaged in high-end furniture-making, we believe it is well worth the higher price – convenience, quality, accuracy, performing a task no other power tool can.  All value points hit in that analysis.

The Triton Doweling Joiner, at under $250,  and the DowelMax Jig, at under $125, will do a good and serviceable job on joinery tasks as well, and at a lower price point.  However, they are not as advanced in skills or features as the Festool Domino and are not as easy and convenient to use.

The accuracy of the Kapex miter saw is extremely high, as is the quality of manufacturing and its dust collection.  It is considered one of the finest sliding compound miter saws on the market today by professional woodworkers.

We consulted with a turnery woodworker whom we consider an artist at his craft. Some of his work involves segmented turnery, a highly specialized aspect of lathe and production work.  Also called polychromatic turning, it involves turning an original piece composed of multiple parts glued together before turning.

As you can imagine, such a workpiece needs to have very precise and accurate mitered pieces to assemble into that original turned piece.  He spoke highly of the Kapex miter saw as being as accurate as needed in woodturning segmented pieces.  His most recent segmented piece was a commissioned urn for a friend, and it shows the precision needed from a miter saw to create the various pieces, all from different woods, to make the original piece loaded onto the lathe.

It’s not so much that the Kapex miter saw does something other sliding compound miter saws can’t do; rather, what it does is always highly accurate, dialed down with precision, and consistent that a piece like that urn can rely upon the compositional pieces fitting so perfectly for the lathe magic that created it.

Dust extraction is another strong point for this power tool.  A 91% effective dust removal, a behind the cut dust hood, and a pivoting 36mm extraction hose make it ahead of its class.

The Festool dust collector is highly regarded in the industry as well.  We wrote of it vs a competitor recently, and you will find our thoughts on its effectiveness here.

A 12” Kapex sliding compound miter saw will set you back right around $1600.  But it will last forever and give accurate and precise cuts for many years to come.

Are There Other Options Besides Festool?

While the Festool Domino, the Kapex sliding compound miter saw, and Festool dust collection make compelling purchases for your shop, with regard to other Festool power tools and accessories, it is fair to say that other manufacturers have caught up somewhat in terms of value.  Value, though, is also somewhat user-specific, and we’ll address that shortly.

We admit our track saw is a Kreg model, and we like it very much.  It is great to be able to bring the power tool to the workpiece rather than the other way around, and the Kreg model serves us very well in our small and modest workshop.

A past article examined the question of whether Festool tracks and Makita tracks were compatible with their respective plunge saws.  You’ll find that article here.  With some adjustments, it is possible to swap out Makita tracks with the Festool track saw.  In fact, the tracks of both can accommodate your circular saw, as can a home-made jig for ripping length on lumber.

DEWALT is a respected line of tools, as well, and some of their line will compare favorably enough with Festool’s line and at a much more budget-friendly price.  In short, on a tool by tool basis comparison of similar skills, there are lower-priced options that will serve you well and last long enough to make them a good value.

Who Is The Festool Market?

In all honesty, the beginner woodworker is not part of their market unless very wealthy.  However, the newbie talent won’t match the skill and capability of the power tools, and the money would be wasted.

The Festool precision and specialized power tools are for the far more experienced, if not professional, woodworkers – furniture makers, cabinet makers, and turnery artists.  A larger woodworking shop with a handful of talented and well-experienced craftsmen producing high-quality furniture pieces or high-end cabinets is the Festool market.

They have the budget to outfit the shop with exactly the tools they need, and Festool would be a strong line of products to choose from for them.

Here’s an long-time hobbyist talking about his experience with evolving skill sets and woodworking talents and who gradually came to Festool fandom for a variety of reasons, some of which we have mentioned here.

We like Festool, as we said, and see value in some of their power tools.  We would like to add some to our shop, but we’ll also investigate trade-offs to save a dollar or two here and there to help us afford the particular Festool products we really do want (hello, Festool Domino).  We recommend you do the same.