How many home woodworking enthusiasts also happen to be lawyers?  And how many lawyers are involved in patent law in the United States?  The combination of woodworking and law will make up this piece today, and we’ll try not to put you to sleep with the latter.

Table saws are powerful and dangerous tools in the workshop, the blade is exposed as we push lumber against it for cutting, and the risk of injury is high if due care is not exercised.  Blade guards, at the least, can lessen that danger, but it still exists.

SawStop, a power tool manufacturer specializing in table and cabinet saws, has helped make them much safer with a patented safety system that elevates their models to a true safety-first status that helps us protect ourselves from ourselves when using them.

We’ve written about SawStop a few times in past articles, and you can find them here, here, and here.  In those articles, we’ve discussed SawStop bypass settings, the difference between professional and industrial SawStop models, and the types of blades to use with SawStop cabinet saws.

We like SawStop table saws very much.  In fact, we’ve been trying to come up with a good argument to justify spending the money to buy one.  They are expensive, but, as we asked in one of those past articles, “What is a finger worth?”  It was a serious question.

Currently, SawStop holds the patent(s) on its safety mechanism, a wonderful feature that can stop a spinning table saw blade in 5 milliseconds or less.  To give you some idea of just how fast that is, there are 1,000 milliseconds in a second.

Let’s learn a little bit more about their saw’s safety measures and then talk sparingly about patents.

If you have a table saw in your workshop, and you likely do, it’s probably the largest power tool there.  We use it to rip and crosscut lumber, and it’s the perfect power tool for these tasks.  A fence on the table allows you to maintain a straight cut that will be parallel to the blade.

All table saws today are required to have a riving knife, a wonderful safety feature that keeps the kerf open as lumber is pushed through the blade.  When kerfs close, the blade can grab the lumber and kick it back at your face or head, and injuries can ensue.  The riving knife keeps that from happening.

SawStop went one step further in developing a braking system that activates the instant the spinning blade comes in contact with human skin.

The blade on a SawStop table saw carries an electrical signal that will sense contact with your hand or arm or fingers, and upon sensing that contact, the signal changes.  When the signal changes, the safety system goes into action.

The blade is housed with a brake that is released when that signal changes, stopping the blade within 5 milliseconds.  Further, the housing then lowers into the cabinet so that the blade is below the table and unable to do any damage to your skin.  Fingers, hands, and arms are saved as a result, and if any damage is done, in most instances, it will be minimal at worst.

The blade and brake system can then be removed and replaced with a spare system, and the saw can be back in action within a couple of minutes.  The most recent figures we could find suggest that there are 67,000 table saw accidents each year in the United States.  We have no idea how many are avoided because the woodworker had a SawStop in the shop, but the SawStop website has many testimonials from those who have avoided injury because of the safety system.

As we mentioned, they are a bit pricey, running between $1600 and $4800, depending on the model you choose.  Again, though, what is the value of your skin?

While the system itself warrants the higher pricing for cabinet saws, it also helps that SawStop holds the patents on the system, meaning that no other table saw manufacturer can mimic the mechanism design.  SawStop has no competition at the moment, the only show in town, but when the patents expire, that will most certainly change.

We know that SawStop holds patents associated with its unique safety system for table and cabinet saws.  But what does that mean?

Patents are intellectual property that gives the patent holder the legal authority to prevent anyone else from making, using or selling the invention for which the patent right was issued for a finite period of time.

In other words, if you have invented a device or thing and file a description and design of the thing with the United States Patent Office, you can acquire commercial protection for its exclusive use for that finite period of time.  Under patent law, that period is 20 years.  You can enforce that exclusive right and prevent any other entity from copying, using, or selling your thing during that period of time.

The thing could be an object, device,  or product, or a new process or way of doing something, or a new technical solution to an existing problem, that does not yet exist in the form or process as designed.

In the past, crude drawings and sketches of an invention and handwritten descriptions of it and its use were filed with the patent office to create those exclusive rights. The finite period of time, the 20 years, began to run on the day of the filing.

Interestingly, a “poor man’s patent” process was also practiced where an inventor would simply mail the drawing or sketch, along with its description, to himself or herself, and the date on the envelope would establish the date of the patent protection.  The 20 years would begin to toll on that date, and the inventor was the holder of the invention’s exclusive use for that time.

Once the 20 years had tolled, though, the device, thing, or process, entered the public domain, and anyone could legally make, use, or sell their own version of the invention, and the original patent holder could no longer enforce the exclusive rights they held while the patent was in force.

Can Patents Be Extended?

This is an interesting question, although technically, the answer is no.  However, as with many aspects of law, there can be minor exceptions.  They have to do with what are known as “continuation patents” and “divisional patents.”  The fine points of these concepts are worth mentioning.

What is A Continuation Patent?

A continuation patent is a new patent application that can allow an inventor to pursue further patent claims based on the original or “parent” patent claim.  There are good business reasons for making a continuation patent application that can have the effect of continuing the patent protections afforded by filing the “parent” claim.  An example might be a further enhancement on the device, thing, or process that was the subject of the original patent claim.

A continuation patent application may be filed at any time while a parent patent or any part of one in the patent family is pending.  Its purpose is to broaden the original claim for protection or to attack a competitor’s design-around.

What is a Divisional Patent?

If, for instance, a device comprised of different parts or processes has had a redesign of a single part or component with a new invention, the claim for that new component would constitute a divisional patent claim, and the argument could be made by the parent device or process has been, to an extent, “re-invented.”

What Is The SawStop Patent and When Will It End? 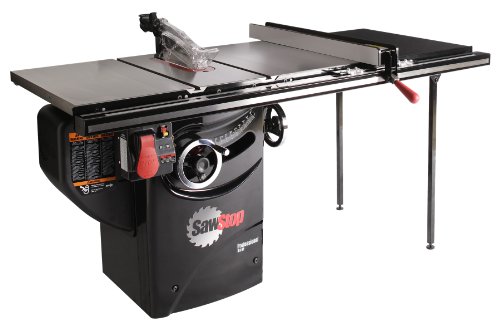 As you can see, many aspects of patents elevate it beyond the original simple claim process.  How does this affect SawStop’s patent protections for its safety system and enhance its ability to prevent patent infringement by competitor manufacturers?

SawStop’s various patents began to expire in 2021, actually.  However, that is not the same as saying that competitors can now design their own version of the safety system.  It holds around 100 patents at this time, although quite a few are continuation patents, as described earlier.  This is why we took the time to explain a little bit of patent law.

Since these continuation patents can expire after the parent patents for the SawStop safety system design and functionality, the actual date when it will lose its ability to preclude all others from copying the design continues to toll.

Consequently, the answer to the primary question of patent expiration could extend as far ahead as 2026.  Solid business practices have been at play with the filing of continuation patent claims that will give SawStop a few extra years beyond the original 20 they enjoyed with filing the parent application.

The safety system is a terrific invention, and SawStop should reap the benefits of its technology as long as it can.  However, as a woodworking enthusiast who would love to have a SawStop, or at least a cabinet saw that includes the same safety feature, competition will eventually occur, and that might mean lowering the cost for one.  Then, I don’t need to debate myself about the expense to justify it.

For those of you who want once again to see a SawStop in action, here’s a video for your enjoyment.  It is only 17 seconds long, and it’s amazing.

Woodworking and patent law.  Bet you never thought the two would come together in one article.  With less than 4 years until the SawStop patent expires, I will just be extra careful with my fingers and keep them all in the meantime.