Circular saws are ubiquitous on jobsites and in most woodworking shops.  They are light, convenient, easily portable, and quick to use.  They rely on a steady hand in the absence of a track or temporary fence, but after a while, that steady hand is learned with confidence, especially on jobsites where cuts can be a bit forgiving, and great precision isn’t absolutely necessary.

We’ve written a lot about circular saws in the past, including how deep they can cut, how to cut thin strips with them, and whether you can turn your circular saw into a track saw.

Today, though, it’s a different kind of circular saw we want to discuss.  We’ll begin with circular saw motors. 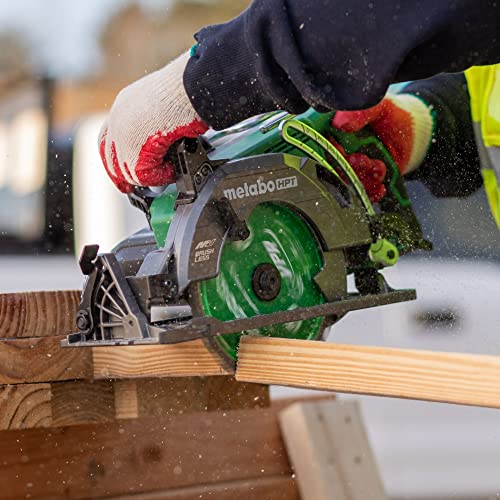 Circular saw motors come in two basic forms:  brushed and brushless.  As they relate to circular saws, the difference can be determinative of which one you will choose:

RPMs might sound significant, but torque and power are more important when cutting hardwoods with a rear handle circular saw, for instance.

What Are Worm Drives in Circular Saws?

Commonly now on rear handle circular saws, though,  you find a worm drive, so-called because the motors work by having a worm gear attached to the motor to move the main gear.  This works especially well for motors that require a large reduction ratio – more torque for less speed.  The simple setup of a worm drive obviates the necessity for more gears.

Worm drive circular saws have the motor at the rear of the saw with gears oriented to 45-degree angles.  This makes for a longer saw and heavier, and the blade will be on the left.

This is distinct from the sidewinder circular saw.  Its spur-gear requires the motor to be in line with the blade, producing a faster spin, a lighter saw, and a more compact size.

Tradition saw the blade-left orientation in worm drive circular saws.  This more than likely sets the weight of the circular saw over the keeper piece of the wood being cut.  This led to greater stability during the cut.

As mentioned, also, the worm drive will produce greater torque and power than a sidewinder motor.  As between faster spin and more power, the worm drive circular saw wins the contest with its power to cut hardwoods more easily and handle more rugged cutting jobs.

Longer, greater reach with the rear handle, better sightlines for cutting, a motor that will deliver more power when needed, and you can begin to understand the appeal of a rear handle circular saw with worm drive.

An example of a good choice for rear-handle circular saws is the Milwaukee M18 FUEL.  It’s a brushless, cordless, 7 1’4 “ rear handle circular saw specially designed and manufactured for heavy cutting tasks.  Milwaukee’s specs claim it will generate 15 amps of corded power, and that is an impressive statement for a cordless saw. 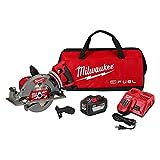 Worm drive circular saws, as we noted, will have the blade on the left side from the user’s perspective.  With the motor behind the blade, rather than beside it, as is the case with a sidewinder motor, the weight of the circular saw is behind the blade as well.  Pushing the saw along the cut line and through the workpieces will be made a little easier because of the weight placement directly in front of the rear handle.

The saw weighs 13.4 lbs, includes an electric break that stops the blade quickly after a cut, and is built with cast magnesium and plastic.  Milwaukee claims it will work with any M18 battery, too.

Released in 2019, the Milwaukee M18 FUEL currently runs around $250, although it can be found for less by sharp-eyed shoppers who hunt for sales at around $200, which is a good deal.

The Advantages of This Rear Handle Circular Saw Model

While we’ve mentioned the advantages here and there in the discussion above about the Milwaukee M18 FUEL rear handle circular saw, here they are in a single bullet list for you to consider.

The only complaint we were able to find in our research for this article was from some who thought the front handle was a bit thin and that the circular saw would benefit from something thicker to grip while pushing through a cut.

It includes all of the customary adjustable abilities of other circular saws, including blade depth for cutting and bevel-cut angle adjustments.  It also has a rafter hook for hanging when not being used.

We found a video with demonstrations of the Milwaukee M18 FUEL and a standard circular saw.  If you’ve never used a rear handle circular saw, it’s a good video to watch, as the videographer is one of us – down to earth woodworker with experience who will tell you what he thinks and make practical observations.

While we have a circular saw in our shop, we don’t yet have a rear-handle circular saw.  However, we’ve used one on a job site and will tell you that the extra length does make a difference when the cutting needs are heavy-duty.

The clear sightline does make a difference, and the greater power from a worm drive motor is much appreciated when heavy-duty cutting on the job site is required.  The videographer makes note that he would choose the rear handle model he demonstrated for the same reason under the same circumstances. 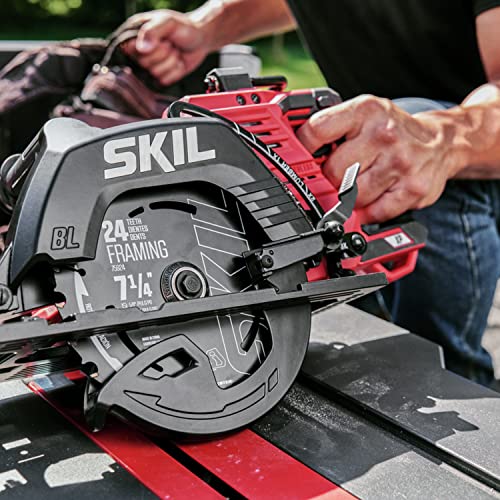 As with most things in woodworking, it becomes a matter of your preference and your comfort level with power tools.  It’s a task-specific choice, actually, determined by your cutting needs.  If the cutting needs in your shop are average, run-of-the-mill cutting, your standard circular saw will likely meet your needs, and you won’t need to look any further.

But, if your cutting requires a punch up in power, hardwoods and such, or thicker pieces, don’t hesitate to turn to a rear handle circular saw.  If you can add one to your cordless power tool inventory for just a couple hundred dollars, you’ll likely be glad you did.

Milwaukee is a good brand, well-respected, and if the worst that can be said about its M18 FUEL rear handle circular saw is that it has a thinner than optimal front handle, it would seem to be a safe purchase.  Maybe the handle will be just fine for you.