The cabinets in our kitchen close softly and automatically once the door begins to move.  It’s a cool feature, and it keeps the door in place well without any slamming or banging about.  The hinges are well-made and perform as they are intended all the time.  The drawers are also soft-close

They aren’t that old, not even 2 years, but they work today as they did when the cabinets and drawers were first installed.  If I am careful, they’ll last us a long time to come.

Let’s take a look at Blum and its products and determine where those available to us in the US are made.

Blum was formed in 1952 by a blacksmith Julius Blum in the city of Hochst, Austria.  As a blacksmith, Blum was involved in the making of horseshoes, and the first product of Blum, Inc. was a horseshoe stud that was added to horseshoes to keep horses from slipping.

When Julius Blum died in 2006, his sons took over ownership and the stewardship of Blum, Inc, and opened more factories both within Austria, where there are now 7, and in Poland, Brazil, and the US.

In 2022, Blum, Inc. has 31 subsidiaries worldwide and is firmly specializing in producing fittings and systems for furniture, especially for kitchens – cabinets, and drawers.  With lift, hinge, and pull-out systems, Blum fills showrooms for kitchen and bath product sales all over Europe, North and South America.

Its international market presence is extensive both with its own facilities and among its 31 subsidiaries around the world.  Here in the US, we’re lucky enough to have one of them, and we’re pretty sure we know where ours came from.

The US Blum facility is located in Stanley, North Carolina.  Cabinet hardware and hinges are manufactured there and distributed all over the American market.  If you have a Blum lift, hinge, or pull-out system of cabinets and drawers, Blumotion as they call them,  in your kitchen or bathroom, it was likely made in North Carolina.

The Blumotion Hinges and Tandem Runners 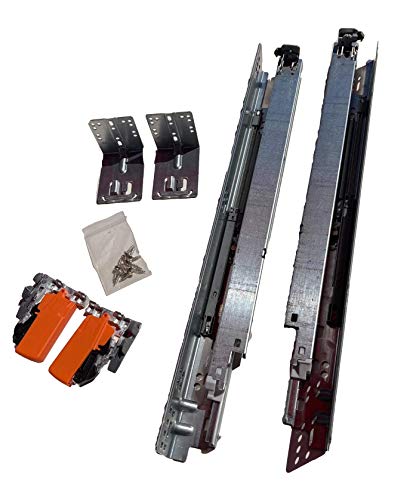 The Blum hinge with the soft-close system was introduced as a new product line in 2009.  At the same time, the Aventos and TandemBox mechanical opening and closing systems/runner began production in their Austrian facilities, later spreading to their facilities outside of Austria, including the US.

The Blumotion concept includes a soft-close system for cabinets and drawers, as well as overhead lift systems for upper cabinets that were first introduced in 2005.

We especially like the concealed drawer slides and runners from Blum in our kitchen drawers.  They facilitate gentle movement when we open and close the drawers in the kitchen.  Of course, the cabinet soft-close hinges are a wonder for us, too, both in the upper and lower cabinets. They work well in keeping all closings soft and silent and will protect the doors and frames from slamming for a long time.

The concealed soft-close hinges are very much like standard hidden hinges seen in so many kitchen and bathroom cabinets, except for the mechanism that stops the doors an inch or two from the frame.  Then, it softly and gently allows the door to close fully.

The standard size for all hidden hinge insets or cups in cabinet doors, whether kitchen or bathroom, is 35 mm wide and 11 cm deep.  So, no special drilling is necessary to fit Blum soft-close hinges, making the conversion from hidden hinges to Blumotion soft-close hinges an easy process.

It’s interesting to note, also, that Blumotion soft-close hinges offer control features by the simple adjustment of a switch that turns the soft-close feature on and off as you wish.  They also include a unique, in the industry, clip mechanism for attaching and detaching cabinet doors very quickly, in less than a minute, and great convenience.  Otherwise, you are left to attach hardware with one hand while you hold the door in the other. 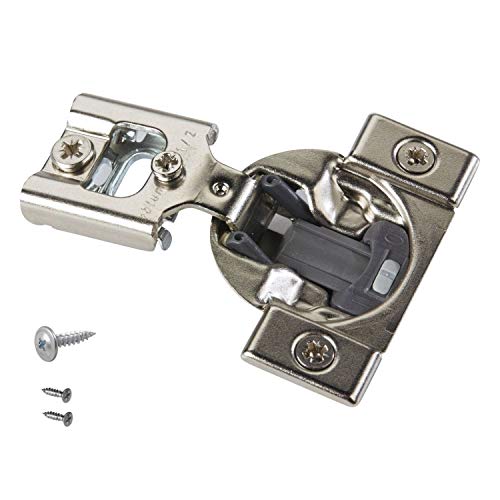 We casually priced the Blumotion hidden soft-close cabinet hinges when researching for this piece, and found one door’s worth (assuming only 2 hinges per cabinet door), and found a pair with mounting plates to run just under $20.

A kitchen wall of 10’ with a window over the sink and upper and lower cabinets otherwise will include 14 doors, assuming a double door beneath the sink.  This means the Blum soft-closing hinges just for that wall will be around $280.

As someone who has them in the kitchen, though, we can tell you they are worth the price.  Cabinets are not inexpensive, and kitchen cabinet renovations are expensive even if you do most of the work yourself.

Nothing is better than seeing something in action.  Words can only carry an explanation so far.  Therefore, here’s a less than 30 second video that shows the Blumotion soft-close hinge in action, up against two other options.

Since we also mentioned drawer runners and have them in our kitchen, we found a slightly longer video about installing the Tandem with Blumotion drawer runners.  It’s worth a watch.

The short answer to the question initially asked is that Blum cabinet hinges and drawer slides we can purchase here in the US are made in the US, North Carolina, to be specific.

But the in-action story about them is far more interesting.  Depending on how many cabinets and doors you have in your kitchen or bathroom, converting to them might be a bit pricey.  But, we remodeled the kitchen and decided to splurge on Blumotion cabinet hinges and drawer slides and runners.  We’re glad we did.