Homonyms abound in the English language.  In this piece, we’ll discuss the plain and simple truths about planes, and one of the things you will learn is that there is not a plain plane in woodworking.  Rather, there are purpose-specific planes, some that are very plain in purpose and some that are dedicated to a particular task.

That’s it for plain/plane word games.  Now we’re on to woodworking planes, plain and simple.

What Is a Woodworking Plane?

When we wrote about the tools a beginner woodworker should have in the shop, among the hand tools we recommended was a plane.  Its use and need will become apparent by the time we finish this article.

Planes are very important hand tools, and they have been a part of the woodworking profession for centuries.  They’re used to smooth wood surfaces, make board ends square, even shave the edges of that stuck doors or windows to make them fit better in their frames.

The hand plane uses your muscle to push a fixed cutting blade of some sort and configuration over wood surfaces to remove material.  They are very versatile tools in the shop, perhaps the most versatile, performing a variety of tasks.  The more you learn how to use them, the more you will likely add to your plane inventory.

In that article we wrote for the beginner woodworker, we mentioned three general categories of planes:

We concluded, though, that a jack plane for the beginner would probably be sufficient.  Other types of planes would be more suitable for specialized tasks, and the beginner could increase their plane inventory as skills advanced.  You can find that article here if you wish to read further.

Among those planes to add would be a smoothing plane, of course, and thus this article compares and contrasts the two:  jack planes vs smoothing planes.

Its role in the woodworking shop is threefold:  To remove wood, to straighten wood, and to smooth it.  The work is usually in that order, too.

What Is The Sole Of A Hand Plane?

We’ve all used a circular saw and understand the bottom surface of the power tool, that level piece through which the saw blade extends to make its cut.  When it comes to hand planes, that same principle applies.

In the case of a hand plane, the fixed cutting blade extends below the tool’s bottom surface, called the sole, to slice off shavings of wood.  That flat sole runs along the wood’s surface as you push the tool forward, removing just the highest parts of the unlevel surface, and thus creating one that is flat and smooth.

The fixed cutting blade is set and exposed below the sole, and the flat sole runs flush along the wood surface as the blade cuts.  The result after the material is removed is a smooth surface.

What Is The Bed Of A Hand Plane? 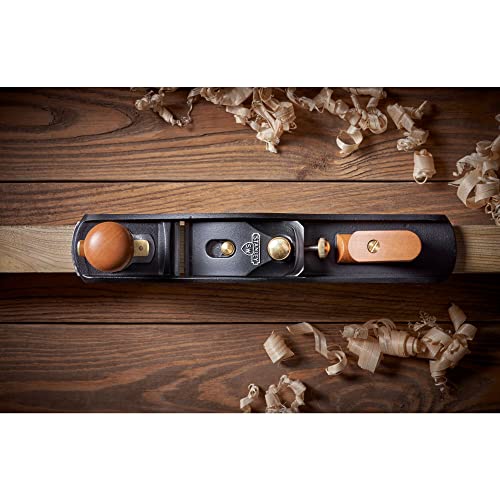 The simple answer to the question is everything other than the sole.  The bed of a hand plane will include the handle that you grasp at the rear of the plane that you will grasp when pushing; a knob at the front of the bed that you will grasp with the other hand to guide and steady the plane; and the control elements for the fixed cutting blade to set its depth below the sole.

Each plane manufacturer will have its own style of setting up the bed configuration, but those are the basic elements of the bed.  Since planes come in different sizes, determined, measured, and identified by the length of the sole and bed, those configurations will differ from model to model and type to type.

What Are The Types of Hand Planes in Woodworking?

For today’s purposes, we will focus on just the two, a jack plane and a smoothing plane, types that are defined by what they do and the part they play in the process of preparing wood for finish.

By size, from smaller to larger, we would note that the smoothing plane is the smaller of the two, somewhere in the range of 5” to 10” in length.  The primary purpose of the smoothing plane, as the name suggests, is to do the final smoothing of the wood preparatory to applying the finish.

The jack plane is going to be larger, ranging in size between 12” – 20” in length.  Its primary purpose is to remove material quickly.   Like the fore plane, the jack plane will usually be the first hand plane to touch the wood.  It will remove lots of material quickly, or at least as quickly as you can push it over the wood’s surface

There are others, and just to mention another two in passing, there are fore planes and jointer planes:

Jack Planes in The Woodworking Shop 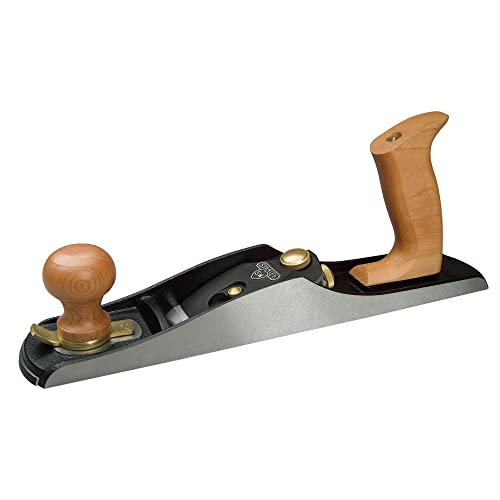 Jack planes are the general purpose bench plane in woodworking shops.  It’s designed to remove large amounts of wood material in a single pass along the wood’s surface.  As mentioned earlier, they range in size from 12” – 20”, although most commonly in the mid-teens for sole size.  It will dress down the rough stock to size quickly and ready it for the more finessed work of the smoothing plane.

It’s the beginning of the process of sizing wood to the needs of the project you are working on.  Because it has the ability to remove a lot of material quickly, depending on the depth to which the fixed cutting blade is set and the strength of the woodworker, it is the first plane to touch the wood, the beginner plane we reach for.

It has a rounded, dull cutting blade that will just plow through the material as it removes it from the wood’s surface.  This distinguishes it both in function and in form from the smoothing plane that will have a sharp blade to smooth out the rough surface the jack plane will create as it sizes down the lumber.

The jack plane is actually a jack of all trades in the hand plane world.  You adjust the depth of the cutting blade and the area over which it will be passed.  You are able to remove bowing and cupping in the lumber by virtue of its adjustable blade angle.

The standard angle of a jack plane is 45 degrees against the wood surface, but the angle is adjustable just as the depth of the blade is adjustable.  This creates versatility in the tasks a jack plane can perform for you, including:

The jack plane is too short to be good for joint work, whereas the jointing plane (mentioned above) is better suited to that task because of its length.  Otherwise, the jack plane is that truly versatile hand plane that made us recommend it as the first plane for the beginner’s workshop.

Smoothing Planes in The Woodworking Shop 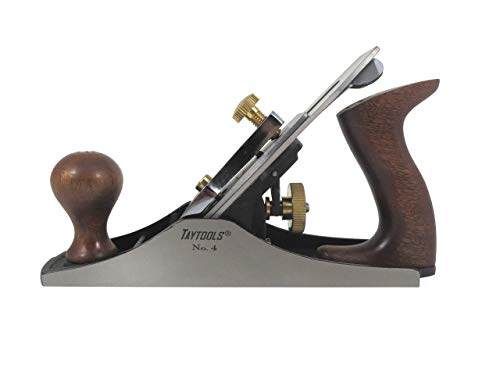 The rough lumber having been better sized and shaped by the jack plane, it’s now time to bring on the finessing talent of the smoothing plane.  The jack plane has gone as far as it can, but the wood is still not ready for the finish quite yet.

This is the final stage of the wood surface preparation for finish but for any fine sanding required by any particular project.  Its customary angle for the cutting blade is 45 degrees, and the blade is very sharp.

It can remove fine shavings and any imperfections in the wood surface that could lead to splintering.  In short, with a very sharp blade and a shallow depth of blade below the sole, the smoothing plane can prepare the wood’s surface for your chosen finish.

The Blades of The Jack Plane and the Smoothing Plane

The jack plane’s blade, as we mentioned, is round and honed straight.  It is also dull.  It does not need to be sharpened before use – it’s just a bull nose of a hand plane that will dig out lots of material quickly as you make repeated passes over the wood’s surface.

The smoothing plane’s blade, on the other hand, is slightly cambered and very sharp, and you want it to stay sharp during use.  So, sharpen it before use to make sure it will remove material smoothly and evenly without digging into the wood’s surface.

With smaller and finer shavings from the smoothing plane, the opening, or mouth, will be smaller.  You want the mouth smaller, too, to avoid the possibility of tear-out.  Any tear-out might call for the return of some lighter jack plane work to ready the surface again for the finer smoothing plane.

We’ve mentioned four different hand planes and their highest, best uses in the woodworking shop.  They are not, however, the only hand planes you can purchase or even the only four you might end up using in your woodworking career, whether professional or hobbyist.

In order to give you a broader understanding of the world of hand planes in the shop, we found a very good video that offers that wider selection of planes, their strengths and uses, and the videographer’s favorite planes to use on his projects.

We’ve given you an overall view of the differences between the jack plane and the smoothing plane.  They include:

The general purpose jack plane is the best recommendation for the beginner woodworker; each is good to have for the more advanced woodworker, and the beginner can grow into the smoothing plane.

We always say:  the right tool for the right job.  Each has its place in the woodworking shop, and it depends more on the projects you’ll be working on and your skill level.