Black & Decker, a manufacturer of power tools, hardware, and appliances, has been around since 1910, when it was established in Towson, Maryland, a little bit north of Baltimore.  About 40% of what the company sells in the United States is actually manufactured in the US with global materials.

It does not stand alone, however.  Black & Decker was acquired by The Stanley Works, another manufacturer of tools and household hardware.  Stanley also owns DeWALT, Craftsman, Porter Cable, and Lenox, among other companies in the same industry.

Each of these power tool manufacturers produces machines that enter the marketplace at different price points, and different quality builds to meet many woodworking needs and budgets – small and heavy tasks, small and large budgets.

Among the power tools produced by Black & Decker is their jig saw.  A hand tool, the jigsaw has an exposed metal blade with reciprocating action (up and down) to make the cuts.

Most models also offer an oscillating action – as the blade moves up and down to make cuts, it also lunges forward with each stroke.  This oscillating action is adjustable from off to higher settings, and the higher the setting, the faster the cut.

None of these models will break the bank, and each has something to offer, whether it is the low price of the corded model or the higher power of the cordless models. 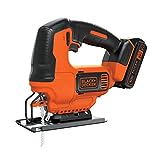 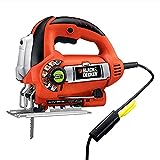 The jigsaw comes with both replacement blades and a variety of blades with different teeth to accommodate different cuts – rough and fine and everything in between.

There are 4 main materials used in making jigsaw blades:

While most jigsaw blades are made to cut on the upstroke, some are made for very fine needs where clean cuts are required, like on laminates, to cut on the downstroke.

The blades will have either a t-shank or a u-shank, and this has to do with the shape of the shank end that fits in the jigsaw’s grip.  The u-shank is slowly going out of style and favor, and has been replaced by the t-shank, which offers a tool-less blade exchange.

The shoe is the base of the saw, the flat base that glides across the surface of the workpiece being cut. The jigsaw shoe is adjustable to create different angles so that the jigsaw is able to make bevel cuts up to 45 degrees, with settings below that angle, including 22.5 degrees, half a 45-degree cut.

Changing the Blade of Your Jigsaw

Safety first, of course.  Turn the jigsaw off and unplug it if it is a corded model.

U-Shank Blade On Your Jigsaw

If your Black & Decker jigsaw is an older model, you likely use u-shank blades.  The grip box on the jigsaw will have two screws on its face, slightly staggered.  Using a flathead screwdriver, loosen each screw but don’t remove them.

Remove the current blade from the grip box; insert the replacement blade in the slot; then tighten the two screws, a little bit at a time alternating, until they begin to grip.  Then, tighten both.

Check the blade to make sure it is tightly installed with no wiggle.  Check, too, that you’ve installed the blade with the teeth pointing out and not in.  This may seem an obvious thing, but it is easy if you are not paying attention to put the blade in backwards.

Plug the blade in if it is corded, and test to make sure the blade is working properly.

T-Shank Blade on Your Jigsaw

If your Black & Decker jigsaw is a more recent model, you will likely have a t-shank blade.  Your jigsaw is going to have a clamping lever at the blade holder (grip box), and swapping the blade out is going to be very easy.

Making sure the teeth are facing out, insert the replacement blade into the blade holder (grip box) as far as it will go; release the clamping lever and wiggle the blade to make sure it is tightly gripped and snug.

Since current models are likely to have the clamping lever tool-less blade exchange feature, here’s a very short video that shows this feature in action.

Simple, easy, and quick.  You will probably have a number of materials to cut with your Black & Decker jigsaw, each requiring a different blade, so knowing how to swap them out easily is a good thing.  The product details will be well-spelled out in the manual, but once you’ve changed a blade for the first time, you won’t forget.