We all know what a right angle is, right?  It’s the standard by which all woodworkers build anything.  It’s 90 degrees, one corner of a box that has four of them.  Cabinet doors fit and look well and even, windows close tightly, the drawers on our bureau or in the kitchen fit neat and snug, and the walls of our house stand straight.

How do we ensure the angles of our project are square?  We use a…square.  We’ve written about squares in the past, especially the comprehensive article on all types of squares, which you will find here.  Every woodworking shop has at least one, if not more, or at least it should.

In this piece we will consider two specific types of squares – the combination square and the double square – along with their particular uses, their strengths for particular projects, and whether you need just one of them in your shop or both.

This multi-purpose square is common in most woodworking and metalworking shops.  It consists of a ruler, called the blade, most often made of stainless steel, and a head that slides along the length of the blade to the desired measuring point.

With a combo square, you can measure the accuracy of 90-degree and 45-degree angles quickly and easily.  Because of its adjustable sliding ruler, it is excellent for marking lines along a workpiece for scribing and ripping lumber on your table saw.

It has other talents, too, but for measuring these angles, the combo square, also called a sliding square and an adjustable square, can’t be beat.  In our previous article on squares, we indicated it would be our #1 choice if we could have only one square in our shop.

Although a combination square will come in several sizes, the 12” size is probably the most practical for all-round general-purpose use and is the most popular.

Prices for combination squares can run between $13 and $150, depending on the materials from which it’s made.  We especially like the Starret combination square with its cast iron head, 12” ruler, and 4R markings.  4R refers to the incremental measurement markings on the blade – 8ths, 16ths, 32nds, and 64ths.  It’s pricey, at close to $110, but it will last forever. 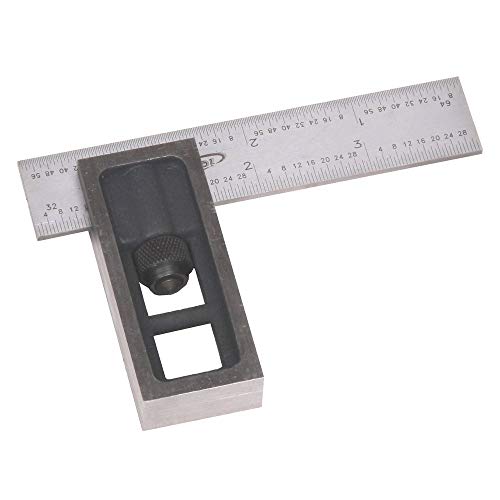 The head of a double square is adjustable and slides along a groove in the blade to the desired measuring point.  It is tightened and secured in place by adjusting a knob easily reached with your fingers.

Because a double square can measure right angles in multiples of 2, is a favored square by machinists who make precision parts, and by woodworkers whose projects are smaller and require precision angles when a measured pattern must be maintained.  Being able to measure the angles in pairs helps maintain patterns.

For those of you who have never seen or used a double square, here’s a video that walks you through its use.

The most common sizes for double squares are the 4” and 6” sizes.  They fit easily in a woodworker’s shop apron and are light when carrying them around with you.  At that size, they will fit in places where a combination square won’t, and make laying out smaller pieces easier.

If you are a model maker, for instance, a 4” double square will be much easier to use, and with a 1” head that gives you a pair of 90-degree angles, it beats the combo square in performance and ease of use.

Some manufacturers sell the combination square and the double square together, and this is probably a good marketing tool.  As a standalone purchase, a double square will range from between $15 on the low end to over $150 on the high end, depending on the size and materials from which it’s made.

We’ve discussed the talents of each type of square, and offered a good idea of their strengths and common uses.  Generally speaking, here they are:

Which square are you likely to use most often?  While it depends on the projects you undertake, we’d guess you’ll be reaching for the combination square most often.  However, if some of your projects involve small elements, or repeating patterns, or you’re a model maker, the double square will come in handy often. 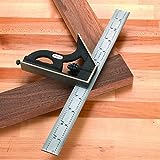 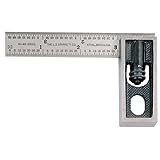 Starret also makes double squares, and as you would expect the price is at the high end of the range for them.  However, with Starret’s reputation for high-quality standards and long-lasting builds, their double squares will last a lifetime of work in your shop.

If the budget permits, having both in your shop can be a very good idea.  You can always opt for a less expensive model of both instead of a Starret.  If your projects will include smaller elements or the need for squares measured in pairs, having both is a necessity, even if you are using the combo square more often.

It’s better to have and not need than to need and not have.  Mixing brands might be the way to go – a Starret combination square, coupled with another less expensive brand for the double square.  Twelve-inch size on the former, and 6” brand on the latter, and all of your projects are covered.