We all know those spray cans of brightly-colored paints that we used on our bicycles when we were kids.  Rustoleum was fun and would add instant color and style to any metals we sprayed it on.  Amateurs that we were, when spraying on something vertical, it always ran down, and that just added to the charm of its use.

But just as we grew up (mostly, that is), so has Rustoleum.  It’s not just a spray can thing anymore.  Gallon cans of different Rustoleum products now fill shelves in local hardware stores and the big DIY stores.

Did you know, for instance, that Rustoleum has become a name in kitchen and bathroom cabinets, just as one example?  Read on to learn more.

Founded in 1921, Rust-Oleum manufactures paints and coatings for both home and industrial applications.  Its products offer protection to whatever they are applied to, including metals, concrete, vinyl, ceramics, and even laminates.

It’s an interesting story, actually.  A sea captain, Robert Ferguson, saw that when fish oil spilled on metal boat decks that had rusted, the oil stopped corrosion from spreading.  He had the idea that an oil-based product of some kind could protect all metals from corrosion and founded Rust-Oleum shortly thereafter.

Whether applied as we did as kids, by spray, or by brush, it was designed for metal application to penetrate rust all the way down to the metal.  It encased the rust and prevented it from spreading, stopping the metal’s corrosion.

It can be applied on either wet or dry surfaces with the same result, and little preparation of the metal is required.  It works by ridding the rust of moisture and air and provides a closed environment for the rust that stops it where it is.

It became popular in home use for use on outdoor items in the garden (benches) and on patios (chairs and tables).  With different color offerings, it would add immediate visual interest and brighten up the objects painted and their surroundings, and it was fun to apply.  It also makes it easy to update colors as the mood strikes in these uses.

Rust-Oleum has branched out considerably since those early days and early uses, offering products for surfaces other than metals.

Should You Use a Primer With Rust-Oleum? 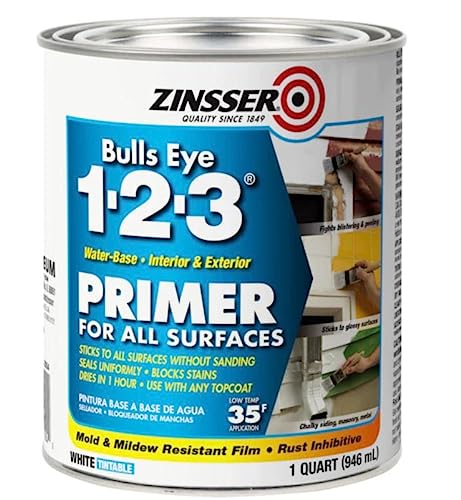 For metals, a primer isn’t necessary.  You can spray it directly on the rust, even, and it will penetrate down to the metal.

For other applications, though, a primer is advised.  You might have guessed, too, that Rust-Oleum offers a primer product.  Rust-Oleum recommends a primer be used on high-tannin woods like cedar and redwood, for instance, and woods that have lots of knots.  Priming these woods will prevent tannin from bleeding through.

Generally, though, we would recommend a primer be used on all woods.  It will give the paint more to adhere to when applied and hide any defects on the surface.

Should You Apply a Topcoat to Rust-Oleum?

When using Rust-Oleum designed to be used on metal to prevent corrosion, a topcoat isn’t necessary.  In fact, Rust-Oleum recommends against a topcoat.  Its metallic spray paint is made with real metal flakes for color, and a topcoat would dull the sheen.

What Other Paints Does Rust-Oleum Produce?

Over the years, the product line of Rust-Oleum has expanded greatly.  Among the paints from Rust-Oleum are:

Alkyd paints have become popular and common choices for kitchen and bathroom cabinets.  They are easy to apply and have the added benefit of being self-leveling  – – this is particularly helpful in smoothing out brush strokes for a smooth and even finish.  If they can stand up to use on kitchen cabinets, they can also be used on furniture.

In addition, you’ll find alkyd paints used on doors, floors, and trim (windows, baseboards, molding) in the home.  They adhere to most surfaces, and as we said, professionals like them because they will level out as they dry, hiding surface imperfections and brush strokes.

Rust-Oleum oil-modified alkyds are also usable on metal surfaces and offer very good rust prevention.  They provide very good coverage, do not chip easily, and hold their color for a long time. 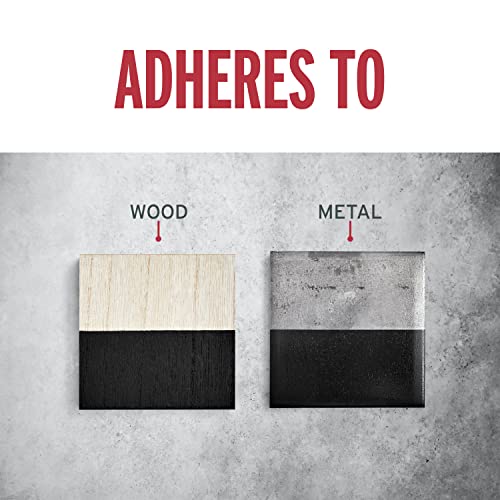 As you have no doubt noticed by now, the answer to the question is yes; you can use Rust-Oleum on wood surfaces and with good results.  It’s not just the spray we can remember from our youth.

You will want to prep the wood just as you would for any other finish application.  Sand it smooth with fine-grit sandpaper, sanding with the grain, and be sure to clean the surface well with a tack cloth.

Use a primer, and Rust-Oleum offers its own for use with its paints.  The paint will adhere better to a primer, and the primer will prevent any bleeding if you are using a high-tannin wood and prevent knots from showing through.

Its chalk paint goes on well and easily and dries fairly quickly, meaning a second coat can be applied in the same afternoon.

Its alkyd paints take longer to dry, though, so patience will be required with its use.  As a plus, this will give you time to revisit any area(s) that need more attention, and you have its self-leveling talent to rely on for a smooth application.

Alkyds also take longer to cure fully, upwards of a week.  However, it will be dry to the touch in a few hours.

Enamels, chalk, alkyds – all in the Rust-Oleum line of paint products, all available for applications on wood surfaces and with good results.  As is common practice, if you have any doubts about using one of them, get a sample-sized can and test it on a scrap piece of the type of wood you’re using for your project just to be sure.

Sometimes, it isn’t even necessary to strip an old piece of furniture before applying Rust-Oleum paint.  Here’s a video to prove the point.

To show the versatility of the line of Rust-Oleum paints, here is another video showing a weathered wood application.

Rust-Oleum’s offerings do not stop at paints and primers, though.  There are also stains and polyurethane products that come from Rust-Oleum.

We don’t have first-hand experience with all of the Rust-Oleum line, but of those we have used on our projects, we are happy with the results.  So, we’re comfortable in suggesting you give Rust-Oleum some consideration.