When we’re just beginning our woodworking hobby and are choosing the tools and accessories appropriate for a beginner, most of us set a budget and do the best we can to stay under it.  This may result in mixing and matching brands in our power tools selection.  We wrote an article about tools for the beginner, even though did not make any brand recommendations.

If we chose cordless power tools, we also had to have batteries and chargers for them.  Today, it’s lithium-ion batteries rather than the nickel-cadmium batteries of the past. With a mix and match of brands in power tools, though, are the batteries interchangeable?  Can we simply buy one battery and charger and use it among all of the brands we bought?

The answer is mostly no and partly yes. 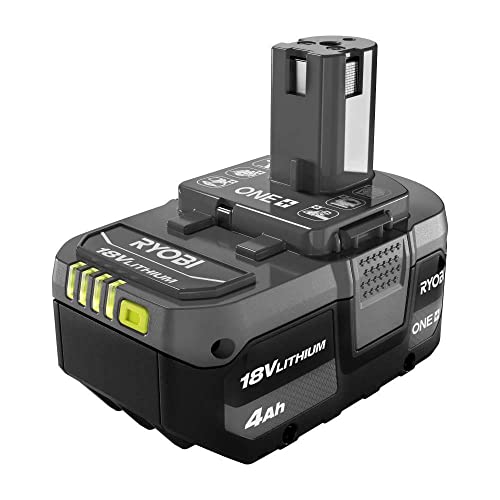 Ryobi is owned by Techtronics Industries or at least the USA division of Ryobi.  Ryobi is also an independent company with separate product lines in other parts of the world outside the United States.

Techtronics Industries (TTI) is a large manufacturing company based in Hong Kong. It owns the Milwaukee brand of power tools, among other brand names in other industries.  However,  Ryobi is a Japanese company that granted licensing rights concerning Ryobi cordless power tools to TTI.

That money comes into play when discussing those power tools and the batteries that power them.  This will become clear as we go along.

This certainly makes sense from both a manufacturing and a marketing standpoint – one battery that works with all of its power tools.  It is convenient for those who like the Ryobi line of tools and have brand loyalty.  They need one battery, maybe two, depending on the projects they tackle, and a charger, and that’s all.

Lithium-ion batteries are a fairly recent technology in providing power to cordless tools.  They have replaced the previous technology, nickel-cadmium batteries.  They are rechargeable and include cells of various voltages from 1.2V to 3.6V, and are combined with each other to create batteries with voltage ratings up to 48V.

Ryobi and other power tool manufacturers then build their own battery packs to match their cordless power tools, so they fit well.  Beyond that, batteries are also in communication with the power tools’ motors as they work together, providing an efficient and effective tool.

Lithium-ion batteries, if properly cared for and stored, have a lifespan of between 3-5 years.  Properly cared for means not leaving them in the charger after they are fully charged, and proper storage has to do with not too hot or too cold.

Can Ryobi Batteries Be Used With Other Brand Power Tools?

Before we answer that question, let’s look at another group-owned set of brand names.

That is actually the case.  The reasoning behind not only Ryobi’s lack of interchangeability and that of any other brand is simple – money.  Each of the various brands was independently making their own battery packs and charges before they were bought out by their parent company, and their tools were configured with their own battery slots into which the batteries fit.

If there were a standard battery pack and charger, all brands would lose the sales of their own battery packs and be left with only their tools to sell.  With a lifespan of only 3 – 5 years, much shorter than the life of a well-cared for cordless power tool, companies know they will sell more batteries before the tools need to be replaced.

Economics drives this part of the power tool industry.

Is There A Way To Make Power Tool Batteries Interchangeable?

Generally, the answer is no.  However, there are exceptions, and one of them has to do with Ryobi.

In an earlier article, we wrote about DEWALT batteries and Ryobi cordless power tools.  You’ll find that article here.

You’ll save money with workarounds, perhaps, but at what cost?  It’s a value judgment to make – risk voiding the warranty for the sake of saving money on a new battery pack and charger.

One other point worth mentioning is the incompatibility of Ryobi ONE+ battery packs and chargers, on the one hand, and older Ryobi power tools.  If they are old enough to carry and use the old nickel-cadmium technology and still usable as power tools, you can not mix the new technology batteries on the old technology chargers.

You would be able to use a nickel-cadmium battery on a new tool or a new lithium-ion battery in the old Ryobi tool.  Either one, actually, could be recharged with a new charger.

The nickel-cadmium battery is an inferior technology, though, and a lithium-ion battery will hold its charge longer and last longer, and you may not want to mix and match things quite that much.  But it is possible.

For your future reference, if Ryobi is a brand you are considering, here’s a video that introduces you to the Ryobi ONE+ battery charger and its ease of use.

While the answer was a mostly short one, there are some exceptions.  Generally, though, Ryobi batteries are not interchangeable with other brands’ cordless power tools.

We also don’t like the idea of workarounds or adapters because of the risk to a power tool’s warranty.  We pay for the warranty when we buy the tool, and we don’t like to waste money.  Perhaps you feel the same way.

Remember, though, that the Ryobi ONE+ 18V battery and battery charger are compatible with all of the 18V cordless power tools in the Ryobi ONE+ line of products.  This leads us to a recommendation:  pick a brand you really like and will suit your anticipated project needs, and stay with it in future purchases.

You’ll need only one battery and charger, or perhaps two batteries and one charger, but either way, you will save money.